Old Town or Oldtown is the easternmost district of the Hub and where the Thieves' Guild is located.

Jake is the weapons dealer, with a wide selection of rocket launchers, sniper rifles, super sledgehammers, assault rifles, combat shotguns, combat armor and near-endless ammunition. Even though Jake is encountered early in the game, his stock is outlandishly expensive. Four members of the Hub police guard his establishment from the inside. In the room near Jake lies a crate with bottle caps and ammunition, and the Vault Dweller can take them. The bookcase in the room next door also contains some caps and a crate in the northeast corner of the shop contains some junk that can be used to fix the Necropolis water pump or the hydroponic farms in Adytum.

Vance is the drug dealer, and can supply the Vault Dweller with rad resistant medicine such as Rad-X and RadAway (which can cause addiction), or health amplifiers such as stimpaks, super stimpaks and first aid kits. Certain drugs cause addiction, such as Mentats, Buffout or Psycho addiction. He is in a large aluminum warehouse with several guards and a group of junkies located on mattresses in the other room. The Hub police won’t become hostile if these individuals are attacked, but Vance will no longer be willing to trade. 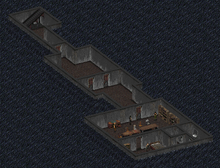 The guild is headed by Loxley which the Vault Dweller is able to join. The main hideout is in the basement of a junkie's home. There are two traps and two locked doors in a hallway leading to Loxley and his gang. Jasmine is Loxley's assistant and will give details about the Steal necklace from the Merchants quest that will enroll one with the guild. Cleo will answer any applicable questions.