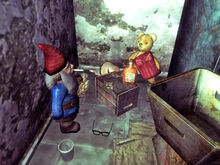 A gnome trying to iron a teddy bear, only visible using console commands
Add an image to this gallery
Retrieved from "https://fallout.fandom.com/wiki/Old_Olney_S._Wilson_Building?oldid=2850418"
Community content is available under CC-BY-SA unless otherwise noted.