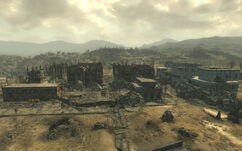 “There's one place you find on a tourist map of D.C. and its lovely suburbs, and that's the cozy little villa known as Old Olney. Ah, but you locals, you know the place. Am I right? It's become a veritable Wasteland legend. Why? Cause it's filled with goddamned deathclaws! I met a guy once, name was Johnny 12 Fingers, had one arm. Turns out the other one was ripped off while he was scavving in Deathclaw central. Lucky he made it out alive, most people don't, at least not in one piece.”— Three Dog, after the completion of Shock Value

Old Olney is a decaying and derelict town in the Capital Wasteland in 2277, inhabited only by vicious deathclaws.

There is no known history about Old Olney, other than its status as another casualty of the Great War. Its grocery was scheduled to receive Nuka-Cola Quantum. Its power plant was owned by PPE. It had the S. Wilson office building as well as a children's hospital.

Sometime after the war, it was occupied by mercenaries who built fortifications, although it eventually became a breeding ground for deathclaws. In the Broken Steel add-on, the Lone Wanderer must enter Old Olney in search of a Tesla coil to be utilized in defense of the Citadel, following the destruction of Liberty Prime. Here, they may come across two ghouls, Kidd and Wint who, based on dialogue choices, may reveal that ghouls had earlier attempted to make a living in Old Olney.

Old Olney is located just east of Vault 92 and northeast of Greener Pastures Disposal Site. It is noticeable on the Pip-Boy 3000, as it is located within a lighter rectangle along with Vault 92.

The town itself is approximately 500 by 500-foot square. It doesn't seem to be a residential town, but there is what looks to be apartments in the southeast corner. There is a main street that runs east-west and usually has three deathclaws wandering around. To the north is a large parking lot with derelict cars scattered about. Deathclaws are found throughout the town, especially on the eastern outskirts near the town hall.

There are two entrances to the Olney sewers. One is a circular sewer manhole located between two ruined buildings in the southwest corner of town. The second is a grate "trap-door," located in the northeast corner of Old Olney, two blocks north of the fire station. It is not obvious, but it is possible to climb out of the trap by using one of the sides like a ladder. The unique prototype medic power armor is located in these sewers on the dead body of a Brotherhood of Steel initiate, near the corpses of a mercenary and a wastelander. Members of the Brotherhood of Steel say that they did not go to recover the armor because of the deathclaws.

Old Olney is infested by deathclaws. There appear to be a total of 7 of them roaming the town, although the actual number will vary at times. There are several deathclaws occupying the Old Olney sewer as well. The deathclaws eventually respawn, so it is impossible to "clear" the town permanently. If Broken Steel is installed, there are two non-hostile ghouls and several dead ghouls in the Old Olney underground.

If Election Day is completed and Dave loses, he will move to Old Olney and declare it the New Republic of Dave.

Old Olney appears only in Fallout 3.

Old Olney is based on the real world location of Olney, Maryland, which is notable as the location of the Olney Federal Support Center, an underground Continuity of Government communications facility managed by the Federal Emergency Management Agency.

Retrieved from "https://fallout.fandom.com/wiki/Old_Olney?oldid=3509698"
Community content is available under CC-BY-SA unless otherwise noted.