The Railroad
Brotherhood of Steel (optional)

The Old North Church is a location in the Commonwealth in 2287.

The church is the oldest one standing in Boston. Built in 1723, it is also the tallest church in the city, with a 191-foot-tall steeple.[1] It was involved in the American Revolutionary War on the night of April 18, 1775, when Robert Newman climbed to the top of the church and lit two lanterns to alert the patriots that British forces were advancing along the Charles River.[2]

Outside of the church is a monument to Paul Revere and Robert Newman, signifying the "midnight ride" of American Revolution history. The church has a large main floor consisting of an atrium with some broken collectors and two partially collapsed balconies, both reachable by stairs at the back, or a collapsed part near the front door to the right. It also has a fairly long basement tunnel, the 18/19th century crypt beneath the church, accessible to the right of the main door. A plaque can be found at the entrance that reads:

“Built in 1723, the Old North Church is the oldest standing church in Boston. Its 191-foot-tall steeple also makes it the tallest church in Boston. On the night of April 18, 1775, Lieutenant Colonel Smith marched with 700 British soldiers to Concord on a mission to disarm the rebels. Using a plan devised by Paul Revere, Robert Newman climbed to the top of this church and lit two lanterns to alert patriots that the Redcoats were coming up the Charles River.

Thus inspiring Longfellow’s famous verse "One if by land, two if by sea." The battles of Lexington and Concord that followed would start the American Revolution.”

The basement tunnel has a golden Freedom Trail seal on the wall. The phrase "The Freedom Trail - Boston" is on a turnable wheel with an arrow on the center. The arrow points to a letter and one can activate letters in a certain order to gain entrance to the Railroad (by spelling 'railroad' on the wheel) as part of the quest Road to Freedom. This will gain access to the Railroad HQ.

At the far wall of the atrium, opposite the passage leading down to the crypt, there is a small staircase with a door to the Old North Church steeple. The steeple is actually part of the exterior environment but is fully enclosed except above; the door exits into the bottom of the steeple stairwell which can be used to reach the roof of the church.

The Old North Church appears only in Fallout 4.

Plaque by the entrance 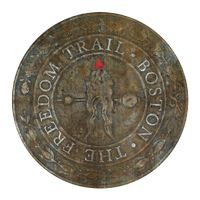 Close up of tomb

Retrieved from "https://fallout.fandom.com/wiki/Old_North_Church?oldid=3265718"
Community content is available under CC-BY-SA unless otherwise noted.