Fallout Wiki
Register
Don't have an account?
Sign In
Advertisement
in: Freeside buildings, Followers of the Apocalypse locations
English

Play sound
Second_Chance.ogg
“The Old Mormon Fort is the oldest building in New Vegas and was recently occupied by the Followers of the Apocalypse.”— Fallout: New Vegas loading screen

The Old Mormon Fort, officially known before the War as the Old Las Vegas Mormon State Historic Park,[1] is the regional headquarters of the Followers of the Apocalypse for the Mojave Wasteland,[2] located just inside Freeside's north gate in 2281. It is notable as being the oldest building in the New Vegas area.

The first settlers, Mormon missionaries, arrived on June 14, 1855 and selected a site on one of the creeks that flowed from the Las Vegas springs, on which they would build the fort. The fort served as the midpoint on the trail from Salt Lake City, Utah and Los Angeles, California. During the Utah War, the Mormons that occupied the fort abandoned it, leaving it to fall into ruin.

By 2281, the fort having survived the Great War, now serves as the headquarters for the Followers of the Apocalypse in the New Vegas area.[3]

The Old Mormon Fort consists of a courtyard filled with tents and non-player characters. There are two sections within the walls of the fort, one in the western and another in the eastern corner of the courtyard.

Upon entering, there are two Followers guards behind a sandbag wall in front of a flagpole flying the Followers of the Apocalypse flag. There are six tents in total within the courtyard:

This guardhouse is directly to the right upon entering the fort. When entering the guardhouse, there will be a small medical area directly forward with nothing of note besides a filing cabinet with one bottle cap inside. To the left are stairs leading up into a bedroom. On top of the bookshelf is the Old Mormon Fort snow globe. There is also a Today's Physician magazine on top of the desk, which is considered owned and must be stolen.

This guardhouse serves only as storage for the Followers, as evident by the abundance of wooden crates. The only items to collect are the tin cans on the second floor.

The Old Mormon Fort appears only in Fallout: New Vegas. 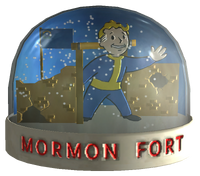 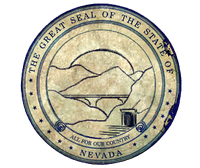