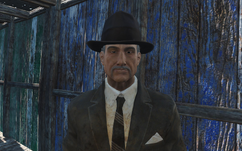 Old Man Stockton is a Bunker Hill-based caravan boss and Railroad operative in the Commonwealth in 2287.

His caravan routes run throughout the Commonwealth and are connected to major towns and settlements such as Diamond City, with a few of also covering some small villages and farms. In addition to being an operative for the Railroad, Stockton is also the caretaker for the large safehouse in the utility basement below Bunker Hill that is home to many escaped synths.

Old Man Stockton found dead near BADTFL Office just outside of Bunker Hill
Add a photo to this gallery
Retrieved from "https://fallout.fandom.com/wiki/Old_Man_Stockton?oldid=3417965"
Community content is available under CC-BY-SA unless otherwise noted.
... more about "Old Man Stockton"
RDF feed
Has platform
PC +, Playstation 4 +  and Xbox One +