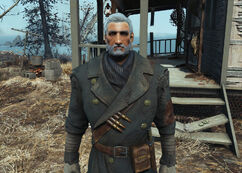 The Last Plank
Longfellow's cabin (after Walk in the Park)

Walk in the Park
Shipbreaker

“You've got some grit, I'll give you that. Can't say that about most folks I know.”

Old Longfellow is a hunter and guide living out of a cabin near Far Harbor in 2287. He is a possible companion to the Sole Survivor.

A native of the Island, Longfellow is old enough to remember previous occasions when the radioactive Fog covered the majority of the island, before its eventual retreat. His indomitable will and physical fitness have served him well into his old age.

Old Longfellow is a seasoned hunter who can recall a fairly large portion of the region's history; from desperate struggle to prosperous hubris. Longfellow is a veritable legend in Far Harbor circles and one of the few guides capable of guiding a person safely through the Fog. His age and experiences made him cynical and he hits the bottle of whiskey a bit too often in recent years.

Longfellow harbors a deep distrust for the Children of Atom. In his youth, he was in a romantic relationship with a girl named Hannah and the two had planned a future together. The cult's followers attacked the pair at their hideaway deep within the Fog and abducted Hannah. Left for dead, Longfellow eventually made it back to civilization. It took him two months to recover from his injuries and by then it was too late for Hannah. The Children's zealots had brainwashed Hannah's mind and converted her to their ways. Hannah was pregnant but suffered a miscarriage due to the radiation she worshipped and was exposed to, claiming it was "Atom's will" for it to have happened. Hannah later fell victim to trappers. Longfellow became an embittered shell of a man, mostly regretting the death of Hannah and his unborn child.

Old Longfellow in The Last Plank

Pre-release image
Add a photo to this gallery
Retrieved from "https://fallout.fandom.com/wiki/Old_Longfellow?oldid=3483339"
Community content is available under CC-BY-SA unless otherwise noted.