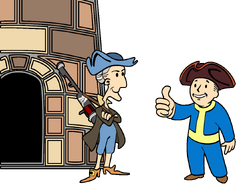 “All of our best equipment was stored in there. Weapons, ammo, schematics, you name it.”— Ronnie Shaw regarding the Castle armory

Old Guns is a Minutemen main quest and achievement/trophy in Fallout 4.

Inside the tunnels the duo will find a maze of storage rooms with some miscellaneous loot and a few minor hazards: an automated turret, some environmental radiation, and a handful of frag mines scattered about. A little exploration will reveal a shelf of cannonballs for the Broadsider and a generator containing a fusion core.

As the duo approaches a security gate at the other end of the tunnel, they will encounter a sentry bot known as Sarge. A short dialogue sequence will reveal that Sarge has been guarding the Castle for ages, but has unfortunately gone haywire and is now hostile. Once the bot has been neutralized, Ronnie will access the terminal on the desk and unlock the security gate. General McGann's corpse can be found in the next room, alongside a crate of wine and a terminal detailing his fate. Ronnie will inform the Sole Survivor that McGann's uniform is theirs to take as the new general, before leading onwards to the west bastion.

After climbing the stairs out of the tunnel, the duo will find themselves on the other side of the steel door. Ronnie will open the door using the nearby button to verify that it still works, then lead the Sole Survivor into the armory. Inside the armory, they will find several weapon mods, a Fat Man, some mines, turrets, traps, and other munitions, and the ultimate goal of the quest: schematics and materials to build artillery at settlements. Ronnie will tell the Sole Survivor to grab the schematics (as well as some smoke grenades) and then build some artillery to do a test fire.

From here, the Minutemen quest line reaches a stopping point. It can be continued by becoming hostile with the Institute, leading to Form Ranks (or directly to Defend the Castle if the Minutemen have at least 8 allied settlements). Alternatively, it can be continued with With Our Powers Combined by destroying the Institute with the Brotherhood of Steel and then becoming hostile with the Brotherhood.

There is a reference to the short story "The Cask of Amontillado" by Edgar Allan Poe during this quest. After entering the locked room with General McGann's body inside, the player character can find Amontillado wine next to the corpse as well as a broken wall with a skeleton shackled inside across from the body. In the short story, a man hates another for insulting him. As revenge for the slight, the murderer lures his victim down into a cellar by promising him a drink of Amontillado wine, and buries him alive inside a wall in this same fashion. This short story was actually based on an urban legend about Fort Independence, wherein an officer is buried alive by the soldiers for killing a favored officer in a duel. In-game the wine bottle has the name "P. Edgar" written on it.

The other side of the door, where the remains of General McGann lay.
Add a photo to this gallery
Retrieved from "https://fallout.fandom.com/wiki/Old_Guns?oldid=3415864"
Community content is available under CC-BY-SA unless otherwise noted.