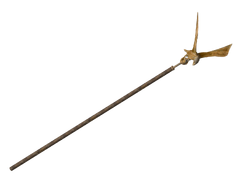 Old Glory is the signature weapon of Ulysses. It is a maple flag pole capped with a golden eagle.

It has a special Grand Slam attack that does 200% damage in V.A.T.S. at the cost of 13 more action points (requires a Melee skill of 50).

It is possible to execute Grand Slam outside of V.A.T.S. (without the required Melee skill of 50 to perform the move) by initiating a power attack (hold attack button) while moving forward. A critically hitting Grand Slam does the most damage of any melee attack in the game, and a Grand Slam sneak attack can kill any enemy in a single hit with the right perks, except for the X-42 giant robo-scorpion and Gojira.

Old Glory can successfully strike about 1245 times from full condition before breaking.