The Old Corner Bookstore is a location in the Financial District[Non-game 1] of Boston in 2287.[1]

Outside the building is a pre-War plaque and a Freedom Trail marker. The location is the fifth stop on the Freedom Trail, with the code "3:I."

Entering on the first floor, there are rows of bookshelves within a single-room store. There is a seating area in the back of the store, near where the second floor has collapsed onto the first. Near the entrance is the checkout counter with two cash registers.

Judging by the rubble from the second floor, there may originally have been computer terminals on that floor. However, all that currently remains is a lectern with folding chairs around it, and a seating area with a first aid box, a lunch pail, and a skeleton with a burnt textbook on the ground.

“The Old Corner Bookstore was originally built as an apothecary after the devastating Great Fire of 1711. Originally the land belonged to Anne Hutchinson, the controversial puritan who was excommunicated and banished from Massachusetts for her "heretical" beliefs and sermons. During the mid-nineteenth century, the Old Corner Bookstore was the home of the leading American publisher Ticknor and Fields. They published the works of such luminaries as Charles Dickens, Ralph Waldo Emerson, Nathaniel Hawthorne, Henry Wadsworth Longfellow, Harriet Beecher Stowe, and Henry Dave Thoreau. Many of those were frequent visitors to the site.”

When entering at night, the second window on the left will have a bright glow, causing a tracer-like effect upon walking closer to it.

The Old Corner Bookstore appears only in Fallout 4.

The building is based on the real-world Boston landmark, the Old Corner Bookstore, which was originally built in 1712 and converted into a bookstore in 1829. The building was threatened with demolition and replacement by a parking garage in 1960, but was "rescued" through a purchase by Historic Boston, Inc. for the sum of $100,000. The building is listed on the National Register of Historic Places. 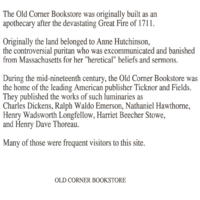