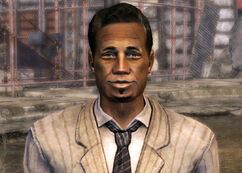 “I was good at it too. But after a while I just felt like a piece of meat and had to quit.”— Old Ben when asked about being an escort

Old Ben is right outside the entrance to the New Vegas Strip in Freeside when the Courier first meets him. He warns the player character not to go to the gate of the Strip without talking with the Securitron gatekeeper first, or they'll get vaporized. After further questioning, he tells the Courier that he used to be in many jobs, such as a bodyguard, male escort, a gun-for-hire, courier, as well as a butcher.

Wang Dang Atomic Tango: When looking for a male escort, the Courier can choose between Ben and Santiago to be a "smooth talker" for the Atomic Wrangler casino. Old Ben can be persuaded through either a Speech check or the Confirmed Bachelor/Black Widow perk.