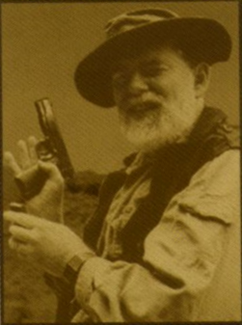 “Say, you're new out here, ain't ya? Ayuh. Thought so. You have th' look of a newbie fresh from the vault, you do. Trogboy! Oh, no, no. Don't take offense, none. First time fer everythin', know what I mean?”

Ol' Slim, otherwise known as Slim, is an old-time adventurer from the Fallout world.

Slim's name comes from how resources and rewarding opportunities are considered to be slim in New California.[1] Slim is familiar with Vault 13, hearing rumors about the Vault, as well as considering if anyone was alive within it. His various wasteland adventures have led to encountering creatures like Radscorpions, cave rats, and even Deathclaws. His humorous, honest and frank advice based on his vast experiences can be found in the Fallout Official Survival Guide as additional notes.

Ol' Slim is only referenced as an author of various advice in Fallout Official Survival Guide.

Retrieved from "https://fallout.fandom.com/wiki/Ol%27_Slim?oldid=3426576"
Community content is available under CC-BY-SA unless otherwise noted.