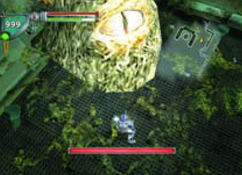 Oh Shit! is a main quest in Fallout: Brotherhood of Steel. It is located in the Secret Vault - Lab core.

After opening the door to Secret Vault - Laboratories' Core, the Initiate meets with Attis and learns his plans. A pre-fight of two stages is begun where Attis, due to experimenting on himself, slowly forms into a ghastly blob. At this stage, the quests to kill Attis starts where his tentacles and some crony radbugs need to be put down. Then his weak point, the eye, can be targeted for some serious damage. This cycle repeats itself three times when finally the eye is destroyed, leaving some energy ammo.

Phase two is then started where his mouth, that is deformed into a powerful suction device, starts pulling and eventually gnawing at you at 80 points damage a gnaw. At this stage the heaviest weapons (and stimpaks) make the job easier to deal some serious damage in return. Finally, the mouth is beaten and the way back to the mutated labs Three is free.

Retrieved from "https://fallout.fandom.com/wiki/Oh_Shit!?oldid=2271370"
Community content is available under CC-BY-SA unless otherwise noted.