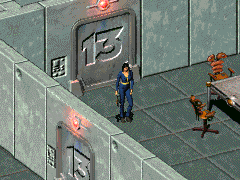 “I'm in charge of Vault security and law enforcement. You might not know it, but the Vault wouldn't run as well if it wasn't for me.”

The officer is in charge of the security and law enforcement is the leader of Vault 13 around 2161.

Being a security officer in the vault, it is their duty to keep order among the citizens. The officer stands guard at the vault's armory, making sure no weapons leave the room. They highly value the rule of law and believes that a place will fall apart without it.

They can be asked for some supplementary firepower from the armory, but the Vault Dweller will not be granted clearance from her or Overseer Jacoren for any weapons withdrawals.

The officer appears only in Fallout.

Retrieved from "https://fallout.fandom.com/wiki/Officer_(Vault_13)?oldid=3189022"
Community content is available under CC-BY-SA unless otherwise noted.