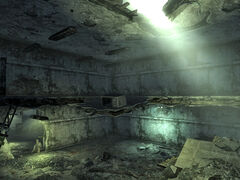 The D.C. Office of Urban Planning is a building located in Seward Square in 2277. A pedestrian bridge connects it to the building beside the Seward Sq. North Metro and is marked on the local map as "Office Building."

The first floor is largely collapsed when entered, with a set of stairs leading to the second floor. Upstairs, there are a few desks and a workstation terminal giving an amusing time sheet readout of 417,040 hours required to catch-up on work missed since the Great War.[1]

Exiting the nearby door to access the skybridge will reveal a button activating the Seward Square artillery. Pressing it multiple times will call in more than one strike.

The building is not occupied by anyone, but the skybridge may have a Talon Company merc guarding it. As soon as the holotape is picked up, a fight will break out between newly spawned Talon Company mercs and super mutants, giving an opportunity to call in artillery fire on both groups.

The Office of Urban Planning office building appears only in Fallout 3.

Vertibird fly-over
Add a photo to this gallery

Retrieved from "https://fallout.fandom.com/wiki/Office_of_Urban_Planning_office_building?oldid=3470398"
Community content is available under CC-BY-SA unless otherwise noted.