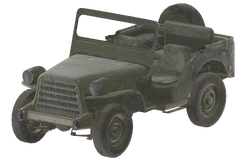 The off-road vehicle is a vehicle that was built before the Great War for military use.

The off-road vehicle is large and boxy with room for four: the driver, a front passenger and two rear passengers on a bench behind them. A spare tire is also mounted on the back on the right side of the vehicle.

While the off-road vehicle appears to be gas powered as the front of the vehicle lacks any signs of a reactor seen on most other vehicles in the Fallout universe, damage to the off-road vehicle will result in the same spectacular explosion and mushroom cloud that one would expect from a fusion-powered car.

The off-road vehicle appears only in Fallout 76.

The off-road vehicles assume a design similar to the Willys MB used by the U.S. military during the middle of the 20th century, albeit with the headlights mounted on the front fenders instead of being part of the front fascia.

Retrieved from "https://fallout.fandom.com/wiki/Off-road_vehicle?oldid=3155355"
Community content is available under CC-BY-SA unless otherwise noted.