On the go
“It's clear this rift won't heal easily. There's too much animosity between those two now. I still believe they can come together in the end, though. I plan to do everything I can to make that happen. We've been through a lot. I need some time to think. Ad Victoriam, Initiate. Until next time.”

She is the daughter of a couple of early recruits in the Brotherhood of Steel known as the "Knights Valdez" and was enlisted by her parents into the organization as an apprentice scribe at a young age. She spent most of her life in bunkers and raised by the Brotherhood. Under the tutelage of Scribe Hailey Takano, Odessa learned to perform her role satisfactorily, taking a special interest in the operation of vertibirds and other flying machines.[1] She is also skilled at programming code.[2] She feels, however, that being a scribe is merely the role her parents raised her into, instead of something she wishes to do as a life choice.[3]

At some point prior or around 2103,[4] Valdez volunteered for an expedition to Appalachia in the East Coast, excited at the chance of having an adventure like her peers. She took the place of Scribe Takano, who was unable to join due to health concerns.[1] Valdez insisted Takano stay behind for her health as well.

Valdez became the official scribe and keeper of the Scrolls of the Brotherhood First Expeditionary Force, and joined the original members of the expedition (Paladin Rahmani, Knight Connors, Knight Thornberry, and Knight Shin) east across the wasteland.[4] After many months of hiking, the team finally made it to Fort Atlas, although Connors was killed in an incident while Thornberry went back to Lost Hills. Valdez took the loss very hard because Connors was like a fatherly mentor figure to her.

Valdez maintains her scribe duties and is in charge of repairing and monitoring technology. Marcia Leone, despite her dislike of the Brotherhood, is known to respect Valdez. Valdez also plays hide-and-seek with her brother Max. She has also heard of the Rust Eagles and sent Initiate Pappas to investigate the Metal Dome.

Odessa Valdez appears only in Fallout 76, introduced in the Steel Dawn update and expanded upon in Steel Reign.

Valdez beside the remains of Isaac Hammond during Mother of Invention

Valdez in Vault 96 during A Satisfied Conscience

Valdez fighting with her pistol 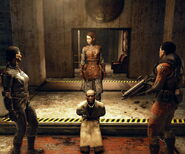 Valdez during The Catalyst