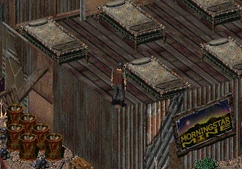 A tall man with a huge, misshapen belly, Hakeswill also had jaundiced skin and a scar ringing his neck. He was a psychopath, with no regard for social norms, often beating up other miners and generally aggravating Dan McGrew. He became a criminal when he cut up the face of a Malamute Saloon prostitute, in revenge for, as he stated, "[making] fun o' me Mum."

Retrieved from "https://fallout.fandom.com/wiki/Obidiah_Hakeswill?oldid=3346736"
Community content is available under CC-BY-SA unless otherwise noted.