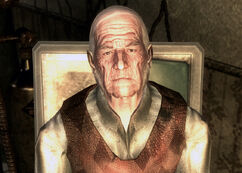 “Would it have killed you to wipe your feet?”

Obadiah Blackhall is one of the inhabitants of Point Lookout in the year 2277.

The last descendant of the Blackhalls, a famous (some say infamous) family of wealth in the history of Point Lookout, Obadiah is stubborn and is still entranced by an old book his family once lost. The Blackhall family was deeply involved in the commercialization of Point Lookout in the early twenty-first century. Constance Blackhall, head of the estate after the New Plague made her an unexpected widow in 2058, cooperated with entrepreneurs from the Isla Negra Realty Company, who had been trying to acquire family real estate unsuccessfully for years. Despite overwhelming local cultural resistance, Isla Negra persistently attempted to bring tourism and modernization to Point Lookout and St. Mary's County.[1]

The Dark Heart of Blackhall: Blackhall wants the Lone Wanderer to bring back an old family heirloom that was stolen from him by the swampfolk.

When Obadiah first meets the player character, he is polite and asks the player character to sit down and chat. Obadiah sits in a wheelchair, next to a pair of gas canisters and crutches, signaling that he is disabled. It is here where one activates the quest "The Dark Heart of Blackhall" wherein they are requested by him to retrieve The Krivbeknih.

Obadiah can be seen praying, in his basement, in front of a dead creeper, after completing the Dark Heart of Blackhall. The player character is then given the option to engage in conversation after his initial disapproval and he will request that they leave his home. From here, there are three unique choice options. When the player character states he hides bodies in rivers, he responds by saying he and the player character are more different than they can comprehend. Telling him that one thought that he was above "this occult nonsense" will cause him to tell the Lone Wanderer that they misunderstood and demean them. A third option will cause the Lone Wanderer to tell him that they will leave and he tells them to make haste.

* The Krivbeknih is only in his inventory after completing "The Dark Heart of Blackhall" if the player returned the book to Obadiah.

Obadiah Blackhall appears only in the Fallout 3 add-on Point Lookout.

Retrieved from "https://fallout.fandom.com/wiki/Obadiah_Blackhall?oldid=3378386"
Community content is available under CC-BY-SA unless otherwise noted.