“I'm so glad you're here. It's been a while since anyone's visited us, and He's been waiting for someone like yourself to arrive.”— Tree Father Birch when the Lone Wanderer first arrives at Oasis

Oasis is a side quest in Fallout 3. It is also an Xbox 360, PC achievement, and a PlayStation 3 trophy.

After the ritual, the Lone Wanderer is placed in the Grove, where they meet Harold. Harold reveals his true identity, and begs for mercy; after being stuck in the same position for decades he is eager for death. The other dwellers of Oasis ask instead to either suppress or expand Harold/Bob's fertility.

To the left after leaving the Grove, an argument between Tree Father Birch and Leaf Mother Laurel is witnessed. Birch wishes to stop Harold's growth with a sap (the same one used in the ritual) in order to protect him, and Laurel wishes to apply a liniment that will accelerate it, to spread his influence to the entire wasteland. Both want the Wanderer to side with them, leaving the others' wishes ignored.

This leaves three basic choices to go about this quest:

Instead of these options, Harold may be burned down with a fire-based weapon such as the Shishkebab or Flamer. If this is done, negative Karma will be received and all of Oasis will become hostile.

The rest of the Treeminders, who are willing to talk at this point, will express their views on the situation. Any rewards are based on what is decided to do to Harold's heart and who is spoken with before entering the caves.

Regardless of what the player character chooses to do to Harold's heart, speaking with Sapling Yew beforehand is recommended. If she is asked about her "god", a speech check will become available, revealing Harold's fear of fire. If the speech check is passed and the player character chooses not to burn Harold down to complete the quest, she will give them Yew's bear charm after completion of the quest. As an alternative, the Child at Heart perk can be used to guarantee success.

The following weapons do not set Harold on fire: the Firelance, frag mines, plasma mines, and the Burnmaster.

The main entryway to the cave system is in the main Oasis hub area. The lock (100 lockpick required) can be picked or Branchtender Cypress can be asked for the key.

Resistance in the Oasis caverns mostly consists of mirelurks, mirelurk hunters, and mirelurk kings (level dependent), along with the odd radroach. Notable loot inside the sunken chambers includes a D.C. Journal of Internal Medicine (in a box by the table, underneath a baseball glove), a couple of Stealth Boys, and a single pre-War book. If needing crutches for the railway rifle, there is a pair on the bed. There is also a silenced 10mm pistol on the table and two cherry bombs in a crate. After getting the loot, continue to the next pool of water where there is a mini nuke underwater in the center of the pool and two stimpaks by a skeleton further ahead. In the next chamber straight ahead are two ammunition boxes with missiles and flamer fuel (flamer fuel in an easy locked box and missiles in an average locked box). There is a missile, blood pack, RadAway, purified water, and a stimpak in the northeast of the area lying next to a skeleton.

In order to advance, going underwater is necessary at times, so if it does not look like there's a way through, try checking underwater. Near the end of the sunken chambers, a thumping will be heard. This is the sound of Harold's heart. When reached and interacted with, the options mentioned before will present themselves to the player character. If the heart is destroyed, then the Barkskin perk will immediately be obtained from being exposed to the radiation. This perk grants an inherent 5% damage resistance.

A nearby door will lead into another cavern, which will lead back to the grove, where either Birch or Laurel will be waiting depending on the choice made. If the heart was destroyed, Birch will be there, expressing regret over not listening to Harold. If the sap or liniment was applied, Harold may be spoken to and will have some dialogue about the choice, where he regrets being selfish.

At this point, the Treeminders who supported the player character's decision will supply them with gifts. The Treeminders may also be spoken to after this to get the dialogue about said choice. Note that Sapling Yew will give Yew's bear charm if the speech check was passed, regardless of the choice made. She is also the only one who will give a reward if the heart is destroyed.

Into the dead center of the irradiated pool water:

As you continue the road (near the skeleton):

Just as you get towards Harold's heart, turn left instead of right (next to a skeleton):

One can access this cave by a door near Harold's heart or southeast of Harold is a cave. The cave is noticeable by a white rock above the water. The door to the entrance is underwater and can be opened with the Oasis cave key or a Lockpick skill of at least 25.

One can enter the cave from Harold's grove, but it is rather meant to be a quick exit from the rest of the cave system. One cannot proceed from here to the rest of the caves, as there is a high ledge in front of the exit to them. Furthermore, entering from the submerged entrance requires swimming past a couple of mirelurks to solid ground before one can fight them.

Inside the cave, there could be mirelurk kings, mirelurk hunter, or standard mirelurks, dependent on the player character's current level.

Upon returning back above water the second time, on the left will be:

At the southeast side of the cave (just straight ahead):

Yew said that "to judge the living and the dead" during the ceremony is a reference to the Apostles' Creed. 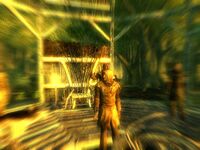 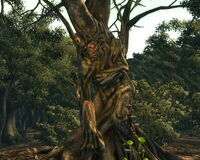