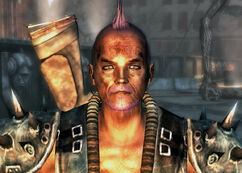 “You just got moved up to a higher grade of sausage, is all.”

O-Dog is a Pitt raider character walking around the courtyard of Haven in 2277.

Infatuated with Vikia the sniper, O-Dog is more than competent with precision-rifle weaponry. He competes with Duke to get Vikia's attention, almost always unsuccessfully. He deems newcomers not as meat but simply as a "higher grade of sausage."[1]

O-Dog spends a lot of time shooting at beer bottles on an opposite building with his .32 hunting rifle. He can also be found walking around Uptown.

Due to the fact that he possesses strange meat and refers to the player and other humans as "meat" and "sausage", it is implied that he is a cannibal.

O-Dog appears only in the Fallout 3 add-on The Pitt.

His name and proclivity for referring to people as meat products is a reference to Pittsburgh's landmark restaurant in Oakland (Uptown in game, where O-Dog is located), Essie's Original Hot Dog Shop (shortened simply to "The O" by locals). Due to the Covid-19 pandemic, Essie's Original Hot Dog shop closed in April of 2020. Hot dogs that were served from "The O" were referred to simply as O-Dogs.

Retrieved from "https://fallout.fandom.com/wiki/O-Dog?oldid=3440071"
Community content is available under CC-BY-SA unless otherwise noted.