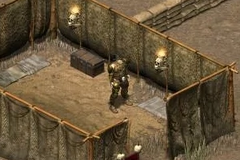 “Alarm! Intruders in the camp! Wake up you piss-ant sons of bitches! I swear I'll cut the balls off anyone I don't see fighting! Get up you curs! If they escape, God help me, I'll burn the damn still to the ground!”

O'Reilly is the man in charge of the raider camp in Freeport in 2197.

O'Reilly is a foul-mouthed brute who tries to keep order over his subordinate raiders. His behavioral characteristics are typical for a raider captain. He is adept in the fine arts of torture, tactics, strategy, guzzling beer and belching. He doesn't have much involvement in the story except for a few choice one-liners. He does get to shout them out very loudly, if that's any consolation to him.

O'Reilly is killed in Freeport by the Warrior and his team during the liberation of Charon.

O'Reilly appears only in Fallout Tactics.

Retrieved from "https://fallout.fandom.com/wiki/O%27Reilly?oldid=3488908"
Community content is available under CC-BY-SA unless otherwise noted.