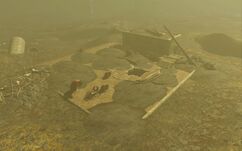 O'Neill Family Manufacturing is a location in the Glowing Sea in 2287. It is located just southwest of Skylanes Flight 1665 and north of the Sentinel site.

The O'Neill Family Manufacturing was a business that repaired and restored broken robots. The terminal contains the records of the customers and their robots. The first was William Thomas, whose Mr. Handy had a screw loose. The robot apparently continuously fell over. The next customer, Jerod Beene, brought in a heavily modified Mr. Handy that was repeatedly bumping into walls in the house. Two of the Mr. Handy's three optical sensors had been wired incorrectly. The last entry shows a customer named Jessica McCann who brought in a company-issued Protectron. The lower compartment of the bot was completely filled with water, which explained why McCann's co-workers could smell mildew on the Protectron.

What appears to be a small building is actually a small portion of the actual building left above ground. Near the locked door, there is a hole descending into the upper level of the building itself. The location consists of a few small rooms over two levels. At the bottom level is a room with an empty power armor station, and a terminal which allows unlocking the room on the surface where up to four high-level ghouls are located.

Clear weather
Add a photo to this gallery

Retrieved from "https://fallout.fandom.com/wiki/O%27Neill_Family_Manufacturing?oldid=3382096"
Community content is available under CC-BY-SA unless otherwise noted.