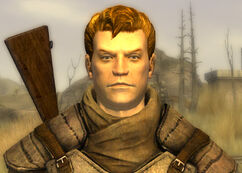 “I ain't scared. I just don't like hurtin' folks, is all. Ma always used to tell me, "Boy, you're the biggest and the strongest, so you mind yourself!" Every day she told me that. Guess I done took it to heart.”

Private O'Hanrahan is an NCR soldier and part of the Misfits living in Camp Golf in 2281.

Raised as a Christian in his rural home, O'Hanrahan enlisted in the army in order to help his family of struggling farmers by giving them one more source of income and one less mouth to feed. Despite his great strength and physically imposing stature, O'Hanrahan possesses a gentle (almost pacifist) personality and generally believes in diplomatic solutions over the use of violence.

O'Hanrahan in ending of game (left)
Add an image to this gallery
Retrieved from "https://fallout.fandom.com/wiki/O%27Hanrahan?oldid=3124417"
Community content is available under CC-BY-SA unless otherwise noted.