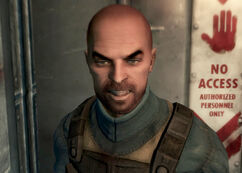 Lightly armored and keen to deliver a bit of punishment to the vault civilians, Officer O'Brian is a vicious, unthinking man who delights in the pain of others. The confusion of the Lone Wanderer's escape makes his violent tendencies all the easier to hide.[1]

Officer O'Brian is guarding the locked atrium door to the Vault 101 entrance together with Officer Richards.

Officer O'Brian appears only in Fallout 3.

Retrieved from "https://fallout.fandom.com/wiki/O%27Brian_(Vault_101)?oldid=3325415"
Community content is available under CC-BY-SA unless otherwise noted.