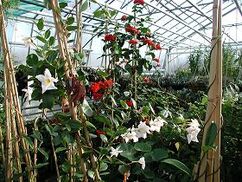 Destroy the carnivorous plants that are taking over the gardens

The Nursery Gardens is a location in the Nursery in 2253.

The garden is a huge greenhouse that straddles the valley river. It is divided into four sections, each detailing a different environment. The four sections are mountains, plains, forests, and deserts. Each section is rife with plant life indigenous to that type of environment. The garden is monitored and controlled by the central computer. However, in case of emergencies, each section has a central hub that acts as a backup unit should communication be lost.

When the earthquake struck, communication was lost with the central computer. The hubs in each greenhouse section immediately activated and began to monitor activity and issue commands to stabilize the area under its care. One of the hubs, the one in the plains section, was severely damaged by falling debris. The hub sent out a burst of scrambled commands that were interpreted by the greenhouse as instructions for altering the plant life and the environment in that section. As a result, a variety of carnivorous plant life was created. The damaged hub then shuts down and no longer monitors the area.

The rogue plants pose a threat to the greenhouse and the Nursery both. Although they are non-intelligent, they are inimical to plant life that they do not recognize as their own species. They are very aggressive in their growth and are insinuating themselves throughout the Nursery. If they run unchecked they will take over as the dominant form of life. These plants also have a rudimentary form of locomotion, much like creeping vines, and are capable of traveling about the Nursery. Having been mistaken for food by some of the herbivorous life in the Nursery, the plants now attack animal life.

The player character can deal with this threat by simply eliminating the plants and their nests. The hub of the greenhouse will also need to be repaired so that it can issue the proper commands to restart proper plant growth.

Harold the ghoul has made himself a home in the gardens, specifically the forest area. It seems that the Nursery took a liking to his tree and wanted a sample of it for its records. Meanwhile, Harold is trying to decide if he wants to exchange 'Fred' for another type of vegetation. In any case, Harold is here just to talk to the player character and offer advice/suggestions for dealing with various problems in the area.

One thing that Harold would like is a nice little hut in the forest that he can call his own. Maybe the player character can program the hub to provide him with one? If not could they can find the materials and build him one? In return Harold can reveal information to the player character that would be of great benefit to them:

Notes: Each of the garden areas needs to be set up as small self-contained worlds. I want them very detailed as if they are an entire theme park in themselves.

The Nursery Gardens were to appear in Van Buren, the canceled Fallout 3 by Black Isle Studios.

Retrieved from "https://fallout.fandom.com/wiki/Nursery_Gardens?oldid=3175973"
Community content is available under CC-BY-SA unless otherwise noted.