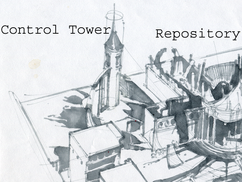 The Control Tower is a location in the Nursery in 2253.

The control tower is accessed via a lift in the factory. The lift exits on the force-bridge landing stage. Activating the bridge will span the gap between the landings with a force field. A secure door gives access to the main computer room in the tower. Neither the lift nor the force-bridge is functional until power is restored.

The tower contains the main computer room that controls all Nursery functions. The computer is composed of two ZAX units operating in tandem with a central brain (a human volunteer was chosen to donate her brain) core between them. Next to the computer are two empty recharging bays. On either side of the door are two massive memory cores. None of this equipment is currently functional, even if power has been restored to the Nursery.

Upon reaching the control tower the player character will find that the secure door has been opened. A thick power cable runs from inside the tower, out the door, and over the landing to the ground below. From there the cable runs to the Repository. Once inside, the player character will find that several floor panels in front of the computer core have been removed to give access to the main power line. The mainline has been severed and a new cable, the one that leads out the door, has been attached.

When the power for the Nursery went offline the auxiliary system, solar-charged batteries, kicked in. The central computer immediately tried to determine the damage to the facility and how best to correct it. Unfortunately, the damage was much more severe than the facility was meant to sustain. Repairs were possible, but not within the time needed to save the most critical of the Nursery's systems, the Repository.

Fortunately, the Nursery had a visitor at the time of the disaster, a Follower of the Apocalypse named Akeisha Moon. Following instructions given to her by the computer, she was able to rig power from the auxiliary system to the Repository to keep it functional. However, this created a few problems on its own. First of all, she had to disconnect power from the central computer. Second, she had to put the Repository into standby mode indefinitely. There was simply no way for the solar backup system to support such a drain on its resources.

There are two ways for the player character to get to the computer room. First, they can restore power to the Nursery and simply use the force-bridge. Second, they can climb the power cable draped over the landing. In either case, they will find Akeisha waiting for them.

The main computer is named Diana. She is the same Diana who poses as the goddess of the Twin Mothers tribe. Once she is activated, she will once again assume her divine role for the tribe. This will include re-activating the robots in Vault 29 and ensuring the isolation/protection of the tribe (for more information, see the area overview for the Twin Mothers Village). Of course, this is all dependent upon actions taken by the player character while they were with the Twin Mothers.

If the player character has done well by the Twin Mothers, Diana will be indebted to the player character. She will offer them technical/medical help or even an animal companion from the repository. Another possible boon is to restock the dying brahmin herds of the wasteland with brahmin that are resistant/immune to the plague. When she discovers that the player character is carrying the New Plague, she will begin work on finding a possible vaccine, but ask them to leave before they infect the entire Nursery.

The Control Tower was to appear in Black Isle's canceled Van Buren.

Retrieved from "https://fallout.fandom.com/wiki/Nursery_Control_Tower?oldid=3175961"
Community content is available under CC-BY-SA unless otherwise noted.