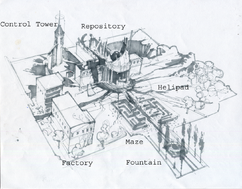 The Factory
The Repository
The Power Plant
The Control Tower

The Control Facility is a location in the Nursery in 2253.

This area is to be used for exposition purposes. It is intended to show the stark reality of the damage that has occurred here in contrast to the beauty of the surrounding valley. It is here that the player character will see the true nature of the catastrophe that has befallen the Nursery. The control facility has been wracked by an earthquake that has literally shattered the area. The buildings are in various stages of ruin, fissures have opened in the ground in several places, and the area appears to be powerless.

It should be obvious to the player character that, unless power is restored, this area is dead. Finding the power source for the many facilities should be the player character's first goal. The control facility can be explored freely; there is little danger here except for random encounters.

Two minor parts of the control facility are the helipad and the hedge maze.

The helipad was originally used to gain access to the Nursery during its construction. It now lies in ruin because of the earthquake that ravaged the area. Sitting on the pad is the remains of a helicopter that was destroyed in the quake. There is nothing else of interest here.

The hedge maze is a simple manor house garden maze. The plants are well trimmed and the path clear of debris and weeds. However, it is home to some of the carnivorous plants that are plaguing the Nursery. Creeping vines, thorn sprayers, and tangle weeds have taken root here. They have inadvertently turned the maze into a trap for unwary animals that wander in.

Note: The maze is not meant to be difficult to navigate. It was simply a fanciful addition to the Nursery during its construction.

The control facility was to appear in Black Isle's canceled Van Buren.

Retrieved from "https://fallout.fandom.com/wiki/Nursery_Control_Facility?oldid=3253597"
Community content is available under CC-BY-SA unless otherwise noted.