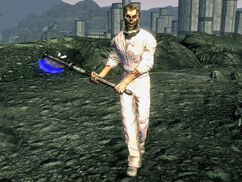 Number 27 is a unique Yangtze camp survivor who spawns along with Number 34 on the cliffs near Little Yangtze in 2281.

Number 27 was kept prisoner in the Little Yangtze internment camp until the Great War. After he and a few other prisoners survived the nuclear bombardment, they slowly began turning into ghouls.

27 and 34 seem to have escaped the fenced-in area despite their explosive collars that have kept the other ghouls trapped in there.

Number 34 and Number 27 is a reference to Alexander Dumas's novel The Count of Monte Cristo. In the novel, Chapter 15 is named "Number 34 and Number 27," which refers to the numbers given to the protagonist Edmond Dantès and his fellow prisoner Abbé Faria, both of them falsely imprisoned.

Retrieved from "https://fallout.fandom.com/wiki/Number_27?oldid=3107804"
Community content is available under CC-BY-SA unless otherwise noted.