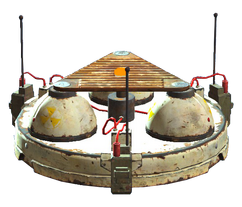 The nuke mine is a weapon in Fallout 76.

It is a nuclear variant of a landmine. The nuke mine operates in all respects as other mines do although its explosion is more akin to that of a mini nuke. It deals both normal damage and radiation exposure damage. The mine also leaves behind a radiation exposure area effect for a short time after detonation. It appears to have three detonators located around the outside of the mine.

The plan for the nuke mine is given as a reward for completing the quest Reassembly Required.

Retrieved from "https://fallout.fandom.com/wiki/Nuke_mine_(Fallout_76)?oldid=3460414"
Community content is available under CC-BY-SA unless otherwise noted.