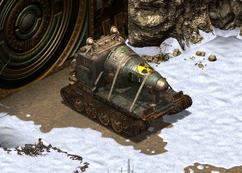 The nuke carrier is a drivable vehicle in Fallout Tactics.

The nuke carrier is fundamentally the same vehicle as the armored personnel carrier, but instead of hauling armored passengers / cargo compartment, it's hauling a live, nuclear warhead. It can only hold three people. The Warrior uses it to carry a nuke to the door of Vault 0 to blow it open, so the final battle against the Calculator can begin. It has 350 Hit Points.

The nuke carrier appears only in Fallout Tactics. 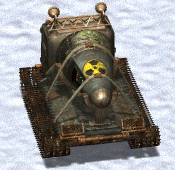 Add a photo to this gallery
Retrieved from "https://fallout.fandom.com/wiki/Nuke_carrier?oldid=2702952"
Community content is available under CC-BY-SA unless otherwise noted.