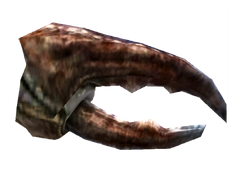 Nukalurk meat is a consumable in Fallout 3.

Nukalurk meat weighs 1 pound, has a base value of 7 caps, and when eaten gives the Lone Wanderer +5 Radiation, AP +10 and +20 Hit Points (24 HP with food sanitizer in the inventory). It glows the same blue as the Nuka-Cola Quantum bottles.

On Nukalurks, in the Nuka-Cola plant. It is only possible to acquire a maximum of 10, as that is the total number of Nukalurks in the factory. They do not respawn. Note that the Nukalurks drop the meat randomly, meaning that they may have an empty inventory instead of the meat.

Retrieved from "https://fallout.fandom.com/wiki/Nukalurk_meat_(Fallout_3)?oldid=3129049"
Community content is available under CC-BY-SA unless otherwise noted.