Nuka Tapper is a holotape game in Fallout 76.

The player controls Vault Boy working as a server at a Nuka-Cola bar. Human and Mister Handy patrons will slowly move down one of four counters. The player needs to fill mugs from one of four taps and then glide them down the counters to the patrons before they reach the end; if a patron reaches the end of the bar, the player will lose a life. Players also lose a life if they slide a Nuka-Cola down an empty bar with no one to catch it.

When human patrons receive their cola mugs, they will sometimes stop to drink them, and slide the bottles back at Vault Boy. Vault Boy must catch the mugs, or else they will fall and break, causing the player to lose a life. However, this is not the case with Mr. Handy patrons, as they will always slide all the way down with their drinks.

Some patrons will leave tips after drinking their Colas. Collecting this tip may cause Bottle and Cappy to appear and start dancing, distracting some of the patrons for a short time. Distracted patrons will not move down the bar, but they will also ignore any Nuka-Cola slid at them which may cause them to crash on the floor if there are no more patrons to catch it. Points are also earned from collecting the tip whether or not Bottle and Cappy appear.

Every few levels, a bonus level will appear. A Bandit will randomly shake all but one of the Nuka-Cola bottles, and he will then shuffle them randomly. The player will take control of Vault Boy, who must pick the bottle that was not shaken by the Bandit. There is no penalty for losing, but 3,000 points will be earned if the correct bottle is chosen.

After several levels, the layout of the game will start to change along with the positions of the bars that patrons come from.

The player starts with 3 lives. It is possible to earn extra lives at certain point milestones, although it doesn't go higher than 4.

The level is complete when there are no patrons left and the game will go on indefinitely until all lives are lost.

Nuka Tapper has high scores up to 20,950, as seen as obtained by KIJ on a split-flap display in the Enclave research facility. Save games can be lost.[1] 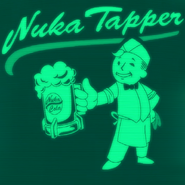