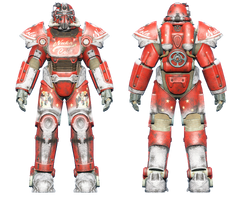 +3 Agility with all pieces equipped

The Nuka T-51 power armor is a set of unique power armor parts acquired in the Fallout 4 add-on Nuka-World.

Nuka-Cola had strong ties with the U.S. Military which allowed them access to their technology, including suits of power armor. The suits were given Nuka-Cola themed paint jobs and used to promote the soft drink. Vim! Pop Incorporated had a similar idea by using suits of their own and giving them Vim! inspired paint schemes to promote their drink.

The stats of this armor are identical to a fully upgraded suit of T-51 power armor, but has a Nuka-Cola paint scheme, equipping all pieces of the armor provides a +3 Agility bonus.

It is impossible to apply material mods to any of the pieces. Like the Quantum X-01 Mk.V power armor, the paint scheme is unique to the armor and cannot be crafted by the player.

The full set can be found in the Nuka-Cola bottling plant's World of Refreshment, at the further end of the Quantum river. It is locked behind a mesh gate that can be unlocked by hacking a terminal (Expert.) Alternatively the terminal can be accessed using a password located atop a table on the rooftop. A nearby note hints at this. 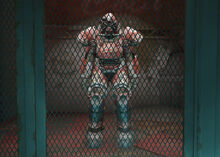