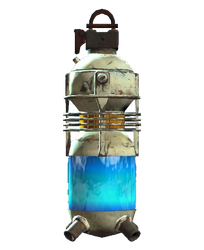 The Nuka Quantum grenade is a weapon in the Fallout 4 add-on Nuka-World.

The Nuka Quantum grenade was a result of Project Cobalt's attempt at weaponizing the Strontium-90 isotope, nicknamed Quantum, that would later be used to create Nuka-Cola Quantum. The grenade looks identical to a Nuka grenade save for a glowing blue band around the lower half that hints at its origin and working principle.

Like all quantum-based weapons, Nuka Quantum grenades detonate in a bright blue mushroom cloud, albeit a much smaller one than for example a Nuka-nuke's. Their damage rating is the same as a Nuka grenade's minus the radiation component, which makes them the second-most destructive grenade type in the game.

Except for the two examples found next to the Project Cobalt schematics, Nuka Quantum grenades cannot be looted anywhere else in Nuka-World or the Commonwealth. Crafting them at a chemistry station from a fair amount of rare resources is the only way of acquiring them, though usually worth the cost for those hesitant to scavenge for Nuka grenades due to the latter's enormous power.

Two Nuka Quantum grenades can be found in the underground experimentation base underneath the World of Refreshment.

This grenade cannot be shot at using V.A.T.S. and will not explode for double damage even if the player character has Demolition Expert rank 4. [verified]

Retrieved from "https://fallout.fandom.com/wiki/Nuka_Quantum_grenade_(Nuka-World)?oldid=3176659"
Community content is available under CC-BY-SA unless otherwise noted.