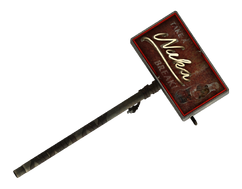 A Nuka-Cola sign, re-purposed as a melee weapon. The sign is mounted on a pole with an electric cord wrapped around the top, and tape at the bottom. It does bonus electrical damage when a Critical Hit occurs.

It has a special Nuka-Break attack that does regular damage in V.A.T.S., but at the cost of 7 more action points (requires a Melee skill of 50).

It is possible to execute Nuka-Break outside of V.A.T.S. (without the required Melee skill of 50 to perform the move) by initiating a power attack (hold attack button) while moving forward.

The Nuka Breaker can successfully strike about 995 times from full condition before breaking.

A pre-release shot of the Nuka Breaker

As seen in Season 1, Episode 3 of Fallout: Nuka Break