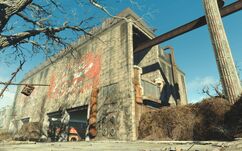 The Nuka-station is a location in Nuka-World in 2287.

The Nuka-station functioned as the hub for the Nuka-Express monorail bringing guests to the park from the Nuka-World transit center near Boston.

The station is used as the beginning of "the Gauntlet," a torture maze constructed for the entertainment of the Nuka-World raiders. Victims are lured to the station by Harvey, which results in those who enter the station via the Nuka-Express forced to participate.

After disembarking the monorail, the Sole Survivor enters the top floor of the trashed terminus building. Opposite to the train, the former information terminal which has been hacked and rewritten. Among the debris on the platform is a usable sleeping bag.

The main exit doors have been thoroughly barricaded, the power to the elevator has been cut and the secondary exit below the stairs (near the dead raider Sykes) has been chained up from the outside. Therefore, the only way to leave the room is down the stairs, thus beginning the Gauntlet.

The station section of the Gauntlet consists of small rooms including gift shop and cafe, consisting of turrets and traps. The remains of other raiders, Gunners, and traders lay on the floor. A tripwire trap is located on the left hand side of the room, which will lead to a chain of explosions if not disabled.

The next challenge of the Gauntlet is to safely navigate a skyway rigged with a variety of traps. At the top of the stairs, several traps are located on the ceiling, such as a Tesla trap and grenade bouquet. It is in this room that the dead wastelander Lucky can be found. A tripwire ahead will trigger explosive barrels.

Conversely, on the left side of the room is a Master locked door that can be used to bypass most traps. Once the traps have been disabled or otherwise avoided, there is a set of stairs that must be used to reach the second floor of the skyway. A poorly built wooden floor that can collapse when walked on leads to the next section.

Once on the second floor, navigate around or disarm the three-way tripwire trap, the remains of the dead runaway Ophelia are beyond the trap. Ahead will be a room with three red doors. The door on the right drops grenades upon opening, and the middle door has a Jangles cymbal clanking monkey surrounded by heads on pikes. The left door has a passage which will lead to the next room.

After going down once again onto the first floor of the skyway, there awaits a room full of radioactive barrels. To the left is the corpse of Corin as well as some anti-radiation supplies, and the dirty and scratched keys. Also to the left is a mall alcove with a metal shelf containing the set of rusty keys. These unlock the Expert locked door, exiting the area to the access tunnels.

Nuka-station appears only in the Fallout 4 add-on Nuka-World.

Start the Gauntlet
Add a photo to this gallery
Retrieved from "https://fallout.fandom.com/wiki/Nuka-station?oldid=3490535"
Community content is available under CC-BY-SA unless otherwise noted.