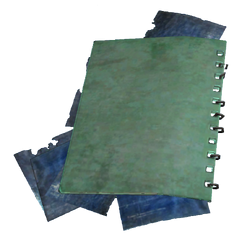 The Nuka-nuke schematics are a schematic in the Fallout 4 add-on Nuka-World.

Before the war John-Caleb Bradberton agreed to a collaboration between his Beverageers of the Nuka-Cola Corporation and the United States Armed Forces. Codenamed "Project Cobalt" and hidden beneath the World of Refreshment ride, although not very secretly as rumors and speculation about the project were rampant around the park.

As part of their research they were also given strontium-90 to weaponize which under head scientist Dr. Meacham became modified into the substance called "Quantum". Meacham and his team developed several uses for Quantum, including mixing it into a soft drink that became Nuka-Cola Quantum, but most importantly they discovered that it could drastically improve the explosive force of grenades and nuclear devices.

The schematics are required to make Nuka-nukes.

Retrieved from "https://fallout.fandom.com/wiki/Nuka-nuke_schematics?oldid=3400065"
Community content is available under CC-BY-SA unless otherwise noted.