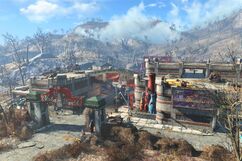 The Nuka-World transit center is a location in the Commonwealth in 2287.

Lying west of the Lonely Chapel, the Nuka-World transit center was the gateway to the Nuka-World amusement park. After arriving here, guests could park their cars and use the monorail to get to the park itself.

The location is guarded by several Gunners including a Gunner Assaultron, under the command of Commander Kaylor. The Gunners stand inside and on top of both parking ramps and in front of the transit center.

The transit center is a medium-sized location consisting of two buildings. The lefthand side parking garage is named "Cherry Garage" and the righthand side is "Quantum Garage." The two are linked with a bridge. The bridge crosses over the intersection of Nuka Lane and Cola Boulevard.

Both parking ramps have partially collapsed, with the Quantum garage containing a working elevator going to the upper deck. On the top deck, there is an Advanced locked safe inside a destroyed car, and on the opposite side, there is a steamer trunk with leveled loot.

Moving forward past the parking ramps, one will see the bus exit and parking. The other building is an entry to the monorail, featuring many Nuka-Cola styled objects including two Nuka-Cola billboards, several Nuka-Cola themed buses, trash cans, and flags. Piles of trash filled with Nuka-Cola labeled items litter the area.

Nuka-World transit center appears only in the Fallout 4 add-on Nuka-World.

Fusion core on a trolley

Overview of the center

Bus parking area and Assaultron
Add a photo to this gallery
Retrieved from "https://fallout.fandom.com/wiki/Nuka-World_transit_center?oldid=3398270"
Community content is available under CC-BY-SA unless otherwise noted.