The Nuka-World power plant is a location in the Nuka-World Amusement Park in the year 2287. It is located directly west of the Galactic Zone, in the northwest part of the map. It can be seen from a distance as it is atop a small rocky hill.

According to the employee terminal, there was a meltdown April 28, 2050, just a few months before the park was scheduled to first open.[1] The accident was then covered up by the Nuka-Cola Corporation. The employee who reported it, an employee named C. Carlson, was apparently fired and the other employees had to be reminded of their employment agreement to not discuss park matters.[2] The problem was ignored from then on.

The roads and grounds of the plant consist of feral ghouls. The path through the plant is straight forward, consisting of a linear path with a few twists and turns. There are a few Nuka-mixer stations downstairs, as well as a couple of Nuka-World raiders (Disciples, Operators or the Pack). The basement has a room protected with a terminal holding a full set of leveled power armor. The upstairs office has a pool table and a desk with a terminal on it. A safe is in the corner behind the desk. Heading down the ramp from there, jump to the room across the broken ramp to find another safe.

On the roof is a locked door that requires a key to open. Behind this door are the controls that restore power to the rest of Nuka-World. The key can only be obtained from the boss that betrays the Sole Survivor during Power Play (Nisha, Mags Black or Mason). The door is also unlocked on completion of Open Season. On the outside, a checkpoint is located at the bottom of the hill, leading to the entrance of Dry Rock Gulch.

The Nuka-World power plant appears only in the Fallout 4 add-on Nuka-World.

Nuka-Power recipe inside the power plant 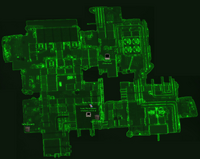