The junkyard appears to have been a dump for unwanted inventory removed from Nuka-World before the Great War, including rides and robots.

The Hubologists from the Hubologist's camp will establish a new camp in the junkyard's barn during the quest Trip to the Stars, once the spacesuits have been delivered to Dara Hubbell.

The Nuka-World junkyard is located on the southwestern outskirts of Nuka-World, due west from Nuka-Town USA. There is a large barn at its entrance. The junkyard proper is made up of multiple winding pathways surrounded by piles of debris with intermittent pockets of radiation reaching as high as +30 rads per second found throughout.

The entrance to the yard's center, where the "Ultimate UFO" ride is located, can be found to the southeast, next to a half-buried Pick-R-Up billboard. The pathway consists of a series of caves, subway cars and other debris leading up to the ride.

The Port-A-Diner found at the Nuka-World junkyard, inside the large warehouse, has a 100% chance of giving out a perfectly preserved pie.

The Nuka-World junkyard appears only in the Fallout 4 add-on Nuka-World.

Upper level of the warehouse

Overview of the junkyard

Lower level of the warehouse 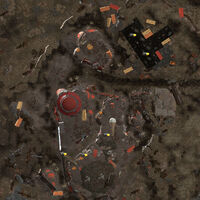 Map with the fusion core locations 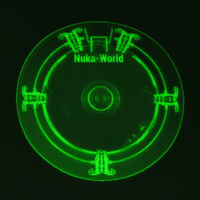