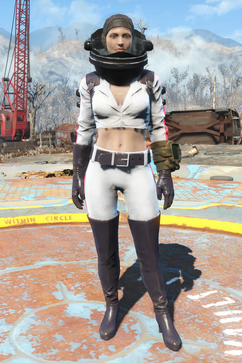 The Nuka-Girl rocketsuit is a piece of armor in the Fallout 4 add-on Nuka-World.

The Nuka-Girl rocketsuit costume was released to retailers in time for Halloween in 2062. The popularity of the costume was so high that stores had trouble keeping up with demand for it.

It provides a Damage Resistance of 5, an Energy Resistance of 45 and a Radiation Resistance of 35, as well as a bonus of 1 to Charisma and the ability to breathe underwater. Nothing else may be worn with the armor.

On a female mannequin sitting on a Nuka-Cola rocket inside of the Nuka-Galaxy attraction in the Galactic Zone. The mannequin can be found at the exit platform at the end of the ride. It will respawn after activating the power to Nuka-World after either Power Play or Open Season so it is possible to get two.[verified]

Fallout 4 loading screen slide
Add a photo to this gallery

Retrieved from "https://fallout.fandom.com/wiki/Nuka-Girl_rocketsuit_(Nuka-World)?oldid=3456860"
Community content is available under CC-BY-SA unless otherwise noted.