Nuka-Girl was a mascot for the Nuka-Cola Corporation.

Nuka-Girl was a promotional character for the Nuka-Cola Corporation originally created as early as 2062. She is depicted on posters in a pin-up style as a blonde woman in a skimpy spacesuit with her raygun, the Thirst Zapper, paired with matching black gloves, thigh-high heeled boots, and belt with holster. A red line accents the side of the spacesuit and the the gloves. After a lawsuit that settled against the Nuka-Cola Corporation for use of Nuka-Cola's bottle design allowed them to rebrand starting with the product itself. Nuka-Cola would take a radical change to Nuka-Cola's image to a Space Age theme with bottles taking on the shape of a rocketship.[1] To compliment the new rocket ship bottle, Nuka-Girl would begin to see reuse because of her glove-like fit with the Space Age theme.[2]

Nuka-Girl appears in the Fallout 4 add-on Nuka-World,[3][4] Fallout Shelter Online,[5] and Fallout: Wasteland Warfare.[6] She is also mentioned in Fallout 4, its add-on Far Harbor and Fallout 76.[7]

Nuka-Girl poster in The Third Rail

Nuka-Girl poster on a bus stop in Nuka-World 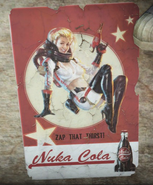 Billboard found in Watoga in Fallout 76 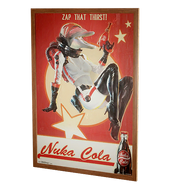 Dolphin parody poster, as seen during season five in Fallout 76 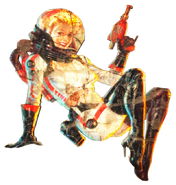 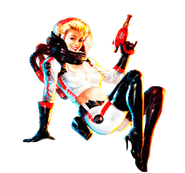 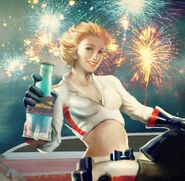 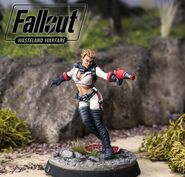