A large, imposing machine with a built-in monochrome monitor at the top for playing advertisements. The machine has been modified from the previous model to allow new bottles to slide into the trays, rather than being deposited mechanically and risking injury. As with the previous model, it's coin-operated with coin-changing functionality.

In Fallout: New Vegas there are 43 located throughout the Mojave Wasteland, in various buildings. The contents of a vending machine are randomly set the first time the player character enters a map cell and remain that way for the rest of the game. In all other respects, it is a standard container and can be used for long term storage throughout the game. 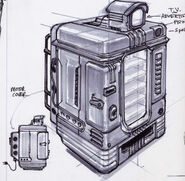