The Nuka-Cola Challenge
Just for the Taste of It

“This facility is a stunning accomplishment by the creative minds at the Nuka-Cola Corporation. We use cutting edge equipment to keep the world's most popular soft drink in full production 24 hours a day. This unit prides itself on over 457 days without a single death or major limb loss of any personnel.”— Milo, shipping foreman

The Nuka-Cola plant is a large, three-story factory building located at the southern edge of the Capital Wasteland.

The building is divided into four sections: Research and development, Storage and mixing vats, Offices, and Factory floor.

The first section of the factory contains the R&D department (the cell's name "Factory Floor" refers to the part beyond the locked door). Look up at the ceiling immediately after entering the lobby to see a hole and part of a filing cabinet with a Chinese Army: Special Ops Training Manual in it. The terminals here contain some info on development of the Nuka-Cola Quantum and the difficulties (or rather casualties) that occurred in the process. There is an R&D safe here, that can be unlocked only with a key that is in possession of Milo, shipping foreman. The safe contains the Nuka-Cola Clear formula plus some random minor loot. The actual factory floor on the other side of the locked door can be reached by a detour through the rest of the building, starting with the door to the storage and mixing vats in the northwest. 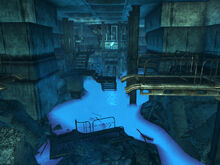 The storage and mixing vats section of the factory is partially flooded with glowing blue liquid. Presumably it is water polluted with the strontium isotope used in Quantum. It gave rise to nukalurks, a special mutation of mirelurk, which can only be encountered in the Nuka-Cola plant (see below for more info). In the room with two nukalurks and the suspended protectron there is a note, "Welcome to the Nuka-Cola family!", on the desk beside a working automated maintenance terminal. The note is addressed to a new worker named Larry and contains his employee ID number that will be useful in the conversation with Milo later. It is dark and difficult to see against the green background of the desk.

To continue on, look for a descending passage. It leads to the flooded radioactive area of the plant. The exit to the offices you are looking for is located in the north east part of the main open area. Pass the first set of catwalk stairs you come to (or climb them for some radioactive respite and to check for any enemies), and look for a second set of stairs off to your left as you head north. Beware the nukalurks and the radiation. It is advised you take a dose of Rad-X and bring some RadAway. Follow the second stairwell around to the north east area where you need to drop down to ground level to access the exit (that is blocked by rubble at ground level). The other catwalks are all dead ends with no loot.

In the offices section of the facility there are two skill books that are found on the second floor: Lying, Congressional Style on top of a safe in the east part of the map in a small office, and a Big Book of Science in the room just north of Winger Mercier's corpse in the SW corner of the map. A note can be found on the corpse regarding a contract to recover the Nuka-Cola Clear formula which was never completed. A Stealth Boy and an assault rifle can be found beside the corpse.

There is a locked room here (lock difficulty depends on level). The room contains four skeletal corpses and a note entitled "Help me". The note is a short diary of a factory worker locked in the closet by Milo as a punishment for taking a prolonged break time. After a few days another worker had joined the prisoner in his misery, apparently for bathroom "misbehavior". Body count shows that more were punished later. It is in the same room as the one with a massive hole in the ceiling.

This is the area behind the locked door in the first cell. If you don't have sufficient Lockpick skill it can be accessed through the offices (follow the signs that say "shipping"). In the bottom level of the factory floor a friendly Mister Handy, named Milo, shipping foreman, can be found. He is in possession of the R&D safe key and the shipping computer password. The key and the password can be obtained either by introducing oneself as the new worker Larry and giving Milo his ID number (see "Welcome to the Nuka-Cola Family!" note above), persuading Milo with high enough Speech skill, resetting him with the Robotics Expert perk or simply by killing him (password is recorded on the holodisk, which causes a "PipOS Error - 26: File Not found for the image).

The packing computer (very easy) is located on the factory floor level two rooms before the entrance to the offices. It can be used to manufacture 3 Nuka-Cola Quantums before the bottling line jams permanently.

A number of terminals can be found throughout the plant which provide a variety of background information about the company and its products, with details on the development, marketing and (perhaps most importantly) shipment manifests for Nuka-Cola Quantum.

The Nuka-Cola Plant appears only in Fallout 3. 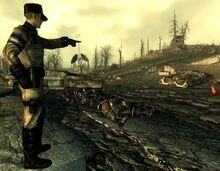 Enclave training outpost north of the plant.
Add an image to this gallery
Retrieved from "https://fallout.fandom.com/wiki/Nuka-Cola_plant?oldid=2182939"
Community content is available under CC-BY-SA unless otherwise noted.