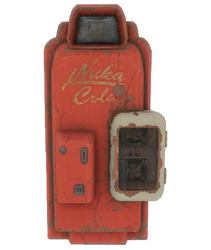 A Nuka-Cola machine is a world and settlement object in Fallout 4.

Nuka-Cola machines may generate up to six randomly selected bottles of Nuka-Cola, Nuka-Cherry, Nuka-Cola Quantum or an empty Nuka-Cola bottle. The bottles are usually visible behind a transparent, openable door. Bottles are sometimes be scattered around the machine as well.

As many locations in the Commonwealth reset after a certain amount of time, all Nuka-Cola machines inside will reset with them, spawning a new set of contents when revisiting the area. It is possible to craft and place Nuka-Cola machines as a decoration in any controlled settlement, although they will not generate any bottles.

The Nuka-Cola machine is located under Decorations → Miscellaneous, under Appliances.

As with many craftable items, the hitbox does not allow placement flush against a wall. One can place the machine and then an object against the back of it without issue, but re-selecting the machine will not allow it to be placed back in the same place that it was just picked up from. This workaround cannot work with pre-existing structures that can't be moved.

Outside the brick wall of Nuka-Town U.S.A. in the eastern parking lot is a Nuka-Cola machine which stocks 12 bottles instead of the usual six, resulting in overlapping bottles.[verified]

Vending machine from the Fallout 4 intro

Loading screen
Add a photo to this gallery
Retrieved from "https://fallout.fandom.com/wiki/Nuka-Cola_machine_(Fallout_4)?oldid=3435638"
Community content is available under CC-BY-SA unless otherwise noted.
... more about "Nuka-Cola machine (Fallout 4)"
RDF feed
Has platform
PC +