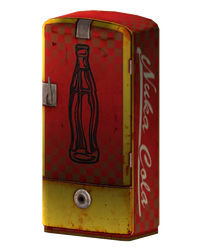 Nuka-Cola fridges are pre-War containers used to refrigerate Nuka-Cola and are seen throughout the Fallout series.

The New Vegas variant is virtually the same as in Fallout 3. Several locations with Nuka-Cola fridges include: 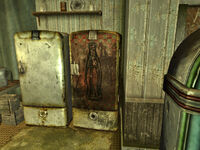 The Nuka-Cola fridge compared to the ordinary fridge in Cottonwood Cove mess hall.

A Nuka-Cola fridge found in the special random encounter Tin Man in Fallout 2.

From the Art of Fallout 4
Add an image to this gallery
Retrieved from "https://fallout.fandom.com/wiki/Nuka-Cola_fridge?oldid=3117720"
Community content is available under CC-BY-SA unless otherwise noted.