The Nuka-Cola fan club is a faction of Nuka-Cola enthusiasts located in the Capital Wasteland in 2277. The fan club was created sometime around 2267 by Sierra Petrovita.

The fan club was founded by Sierra Petrovita about 10 years before 2277, and at some point, Ronald Laren joined the club. Over the past decade, the club has hosted many events and awards, such as a Nuka-Cola collection award and a Nuka-Cola cook-off, which occurs only once a year. Sierra has won the collection award for the last ten years in a row,[1] and won the cook off in 2276 with her poached roach with Nuka-sauce. The fan club is still running in 2277, still having only two members, but membership is open to the public.

The Nuka-Cola fan club appears only in Fallout 3. 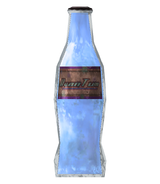 The object of Sierra's obsession.