The Nuka-Cola bottling plant is a location in Nuka-World in 2287.

This industrial facility has been converted by the Nuka-Cola Corporation to serve as an attraction on top of its normal duties. The standard bottling facilities were augmented with a water ride, dumping hundreds of gallons of processed Nuka-Cola to form a regular river. In October 2077, the river was made of Nuka-Cola Quantum, the newest, hottest beverage in the Nuka-Cola catalog.

Eventually, with no humans to prevent the invasion of local wildlife, the plant became a nest for the local mirelurk population. Over time, the River of Quantum and its strontium additives mutated these mirelurks further, and over the generations, they grew faster, tougher, and deadlier than their regular counterparts.

It is for this reason that Sergeant Lanier's recon team was entirely wiped out. The Nukalurks knew to use their natural defenses to their advantage and gradually wore down the Gunners through attrition. Lanier's team made a last stand by the Quantum bottler but were wiped out by the Nukalurks. Even their support, pre-War RobCo Assaultrons, could not save them.

Just south of the building is where Nuka-World guests would wait in line to ride on the river of Quantum. It has a sizable amount of fever blossom located here and in the bus station just to the west. The roof of the building as well as the pond to the north feature a Nukalurk infestation, including the Nukalurk queen.

There are several entrances to the facility, including where the boat ride enters the building in the south, in a drainage pipe to the north, a loading dock door to the north (initially locked) and a door above and to the right of the loading dock.

Scavenging the whole area, including the World of Refreshment, one will be able to find a total of:

The Nuka-Cola bottling plant appears only in the Fallout 4 add-on Nuka-World.

Scene with the two skeletons, both wearing a wedding ring 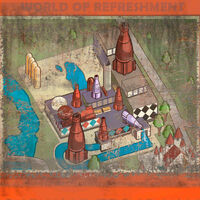