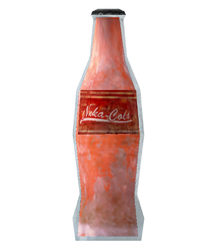 Nuka-Cola Victory is a consumable item in Fallout: New Vegas.

Nuka-Cola entered the beverage market in 2044, with the invention of the soft drink by John-Caleb Bradberton after two years of experimentation. Though strictly unhealthy (containing 120% of the recommended daily allowance of sugar), it took the United States market by storm and within a year it could be purchased nationwide. Its popularity rapidly increased and within several years it was the most popular beverage across the globe.[1][2]

Nuka-Cola contains excessive amounts of caffeine and 120% of the recommended daily value of sugar, making it decisively unhealthy for extended consumption.[6] To counter the negative image, it was marketed as being fortified with vitamins, minerals and "health tonics."[7] Intensive consumption can cause Nuka-Cola addiction, which can lead to splitting headaches if Nuka-Cola isn't consumed on a regular basis.[8] Nuka-Cola Victory is a "refreshingly patriotic" flavor of Nuka-Cola that enjoyed a limited release in the American Southwest. It is colored orange with a red, white and blue label, giving it a distinct look, much like Nuka-Cola Quantum. It remains a rare find in the post-apocalypse.[9]

Victory is a bright red-orange variant of the Nuka-Cola product. Drinking it provides healing, grants a bonus to Action Points, decreases Perception, and increases radiation. In hardcore mode, it reduces Sleep and increases Dehydration. Both positive and negative effects scale with the Survival skill.

Nuka-Cola Victory is the second rarest of all Nuka-Cola variants found in Fallout: New Vegas, with Nuka-Cola Quantum

being the first where only one exists in Lonesome Road. Like Nuka-Cola Quartz, Nuka-Cola Victory is not sold by any merchants, except for those selling bottles of Victory that are on display. A total of ten bottles of Nuka-Cola Victory can be found in various locations in the Mojave Wasteland, all placed in-world rather than in containers. An additional four bottles can be found in Big MT.

Aside from these locations, the only way to obtain Nuka-Cola Victory is through the recipes given by taking the Nuka Chemist perk.

Retrieved from "https://fallout.fandom.com/wiki/Nuka-Cola_Victory_(Fallout:_New_Vegas)?oldid=3484590"
Community content is available under CC-BY-SA unless otherwise noted.